Düsseldorf, 30 October 2018. Following two large bond issues at the beginning of the year, the EAA placed a further, USD 1 billion bond issue on the capital market in October. The price (nine basis points above 3-month USD Libor) was more attractive than had been expected by participating banks. Nearly 80% of the issue was underwritten by official institutions, primarily central banks.
The broadly diversified international investor base was dominated by American investors, with North American supranational institutions and Latin American central banks taking 32% of the issue. African investors took a further 25%, and Asia was also well represented with around 18%. From the EAA’s point of view, it was particularly pleasing that over a quarter of the volume was placed with borrowers who were investing in EAA paper for the first time. Providing international investors with intensive support is paying dividends here and ensuring the EAA has a broad base for its refinancing.
With its October issue, the EAA has completed its medium-term refinancing for the current year.

Distribution by institutions (in %) 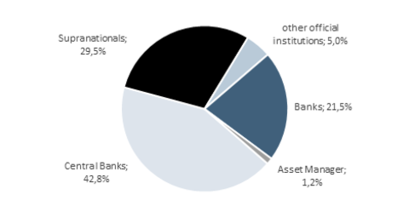 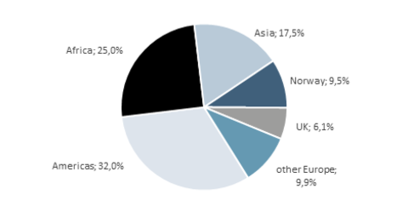